Tarkov Randomizer Lets take all guns, throw their attributes together into a pot, and fish out new guns. It's a bit like those Lands on the Border. Restart the Server for new Guns! Easy! Wow!

I will make it quick:

I have also not tested weapon modding with this.

Same as any other mod. Make sure the folder structure is as follows: SptTarki\user\mods\Nyndomizer 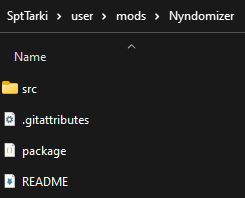 in the .ts file, you can find the following text.

It changes every field that has a number. (Integer and Float) and adjusts them up and down - making them up to 10x more powerful/bigger. (This also goes for recoil and other things. Expect weird chaos)

It exchanges all the textfields in the game, causing absolute chaos. Every text in the game can be exchanged with any other text in the game. Expect weird behaviour and long loading times while the server starts.

If true, this allows most weapon attachments to be attached to most weapons. This will cause glitches and unintended behaviour. There will also be errors during botspawning in the console, though it still works. The weapons of bots can just end up not firing once.

This can run into trouble with other mods, especially if they change things with bot loadouts or hardcode things to be different. That is unfortunate, but I will not change it.

Changelogs are presented by Vladimir Hunchbakovski

- added the option to mix and match most attachments when the option everythingwitheveryting is on true.

- added the ability to shuffle all text fields

(Added the ability to exchange over 2 parents, not just 1 - only on whitelisted entities. The code is bad, but makes prototyping easy.)

I just switch fields of items with the same parents, with a few additional safechecks to ensure it only affects items and nodes are kept as is.

Note: The commercial part in the picture is a joke, I have no interest of selling any commercial space.

Just a few of the 227 users online