Go to link Back to website
Mods made for AKI 2.3.1 or older are NOT compatible with 3.0.0.
Please do not spam mod comments with requests for mods to be updated - repeat offenders will be muted at moderator discretion.

The purpose of this mod is to add balanced late-game ammunition for all calibres that are better than their vanilla counter-parts, without ruining game-balance.

TL:DR? Read only the white highlighted text for summary!

The ammunition is balanced such that it feels entirely fair to unlock, purchase and use. The mod now features an incredibly detailed config that let's you change almost every aspect of every bullet, and also has a simplified settings group if you want to tweak but not that much in detail. I recommend using my mod as it comes and playing it as I envisioned, but you can make the bullets whatever you like.

This mod adds one "ILLEGAL" ammunition type for each "normal" calibre in the game that are notably better than the best vanilla bullets within their calibres. To keep the ammunition powerful, but not over-powered, each new "ILLEGAL" bullet pulls their stats from the bullets with the best value for each stat in their calibre group. For example, in vanilla the best 9x18mm PM bullet for damage is SP7 GZH, with 77 damage, and the best for penetration is PBM GZH, with 28 penetration power, so the 9x18mm PM ILLEGAL bullet would have their combined stats at 77 damage and 28 penetration. This means that the ILLEGAL ammunition is overall more versatile and a bit stronger than vanilla ammunition, but still contains the essence of limitations that come with each different calibre, a 9x18 can't and shouldn't be able to penetrate armour class 6. The bullet stats that are currently configured to work in this way are: Damage, penetration, Accuracy, Recoil and Velocity.

ILLEGAL ammunition can be obtained through purchase from the custom Dark Web trader "WEB AMMO", or found in various containers. Loyalty level one is unlocked by default. Loyalty level 2 requires level 23 and 1m spent. Loyalty level 3 requires level 35 and 5m spent. Loyalty level 4 requires level 42 and 10m spent. See picture for trader stock and ammo stats, it may be outdated with later versions, can't update it each time I make a change. All ILLEGAL ammo comes in limited stock, amount depending on calibre size, with exceptions. The chance of ILLEGAL ammunitions spawning should be low, but different ILLEGAL ammo have different chances at spawning. The more expensive the ammo is to buy, the rarer it is to spawn. The chance of finding ILLEGAL item in a container depends on what Spawn Category the container is in. The Very High category has the highest chance of spawning ILLEGAL ammunition, and is limited to the more "rare" containers Jaeger's Stash, Safe, Plastic Suitcase, and Jacket (214). The Very High category is used as the "base" or default chance value when calculating the chances for the other categories. The containers in the High category is Dead Scav and Ammunition Box and has three times less spawn chance for ILLEGAL ammunition. The containers in the Normal category is Buried Barrel Cache's, Ground Cache's, and Wooden Crate's and has six times less spawn chance for ILLEGAL ammunition. Finally we have the Low category, which contains All the Weapon Boxes, Sport Bag's and Jacket's, which has ten times less spawn chance for ILLEGAL ammunition. This should be balanced so that you can specifically go out of your way to "farm" ILLEGAL ammunition, but still find it through regular gameplay.

You can now sell ammunition on the Dark Web (to WEB AMMO trader) for a higher price than the regular traders. The higher your reputation (loyalty) on the market, the more people are willing to pay your for your ammunition. This has been balanced such that ammo sells for 65%, 70%, 75% and 80% of the ammunitions buy-price at loyalty levels 1, 2, 3 and 4 respectively. The sell-prices have been balanced such that it should be difficult, if not impossible, to use lower market prices on ILLEGAL ammunition to "cheese" free money, but still give you enough money for ammo that they become worthy loot when the flea market is disabled or not unlocked. ILLEGAL Ammo is now disabled on the Flea Market by default, but can be changed in config. 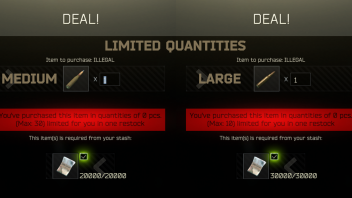 To balance the new ammunition I considered price, negative stats, secured container removal and time of unlock. ILLEGAL ammunition is powerful, but their lack of quality regulation make them unreliable ammunition. Overall, they have a higher chance at malfunctioning and misfiring than other bullets in their calibres. Their poor construction make your gun heat up and wear down MUCH faster than with most regulated ammunition. Depending on the calibre size and purpose of the bullet, they are categorized into four; small, medium, large and special. With this patch, all ammunitions within the same category have the same values for these stats, but with the rework that is coming soon™, each bullet will have their own value for each stat. Through testing, the stats have been balanced such that you can spray about two "normal" sized magazine for each calibre, 35, 30, 20, 10 capacity magazines respectively, in quick succession without having a huge chance of malfunctions, however anything more than that and you run into major malfunction issues, as well as a high weapon max durability degradation. The higher the calibre category, the earlier you will experience major malfunction issues. After shooting three mags of "normal" size for the calibre in quick succession, you can expect to have had many, 3-10+, malfunctions, most being with the last magazine, and to have lost about 20 durability and 15 max durability. Note that when I tested this I emptied 3 magazines at full-auto right after each other, so weapon heat was a major factor to increase malfunction chance in the later magazines. Since you loose max durability and have a higher chance at malfunctions when you shoot with a overheated gun, this can be avoided by simply shooting less within a short time period. This encourages an interesting playstyle of conserving fire, and only spraying when it is smart to. Since they are contraband, and only sold on The Dark Web, they are also expensive and in limited quantity. The general rule is that small calibres such as 9x18 has a limited stock of 50 per trader reset, medium calibres such as 5.45x39 has a limited stock of 30 per trader reset, big calibres such as 7.62x51 has a limited stock of 10 per reset and special munitions has a limited stock of around 5 per trader reset, but there are exceptions. The WEB AMMO trader resets his stock every 3 hours by default. The better calibres are also difficult to unlock, as Dark Web traders doesn't sell their best wares to just anyone. ILLEGAL ammunition can also no longer be placed inside secured containers, increasing risk/reward when finding and using them. 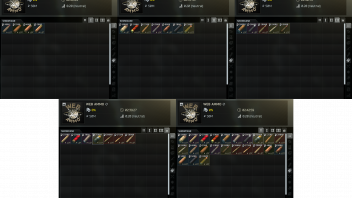 When considering what ammunition to unlock at what loyalty, and at what level those loyalties should unlock, I took into account ammunition progression of vanilla bullets, guns available to the player at the time of unlock, encouraging calibre exploration and the bullet's stats. My aim was to make it so that there was no easy META development, where you would be able to run only one ILLEGAL bullet from the very start until late-game. I am encouraging exploration of lesser used calibres, such as 7.62x25mm TT, .300 blackout, 5.7x28mm, 9x21mm, 9x39mm, .357 Magnum and 20/70 buckshot by having their ILLEGAL bullets unlock earlier than the normal META calibres. In many instances these calibres are also a lot stronger than the other available ammunitions at the time of unlocking them. However, I think their stats are not so much better than available ammunitions that they outcompete them at the prices they are sold for. It is by design that by the time you unlock new ILLEGAL bullets, the very best of the ILLEGAL bullets that are unlocked, are often for guns that should be unavailable to buy from traders for money at that time. This is to encourage the use of barter trades, to get early access to guns that can use better ammunition than other's that are available to the player.

IMPORTANT: Check Patch Notes txt file or in the patch notes on SPTarkov website for important notes on how to update which may vary per update.

This mod contains a config file for easy configuration of almost everything, although I recommend playing with my balanced default settings. It also contains .TS files for those that understand some coding and want to tweak in more detail.

If you have any coding experience and can help me out with achieving any of the above points, I would be happy to get guidance. For some of these, I do not have the experience to fulfil them yet. Doesn't mean I won't in the future, but as of now, there are many things I am unsure how to add or fix.

A special thanks to fellow modder JoshJ5Hawk for allowing me to use his source files from his mod Super Ammo to build this mod upon, and for his help figuring out some issues I encountered during development. Please check out JoshJ5Hawk's Super Ammo mod, it is a great mod for those that want super over-powered ammo. A big thanks to Kobrakon for helping me out a ton, certain important features would not be possible without him. Go visit their profiles and mods, they are great at what they do. Also a special thanks to the other modders in the SPT Pub Discord channel for helping me.

This is my first mod for SPTarkov, and very much experimental. Let me know of any issues, but due to my lack of coding experience, there is only so much I am able to fix.

Rate this mod ⭐⭐⭐⭐⭐ if you enjoyed all the work I did to bring you this!

Just a few of the 164 users online